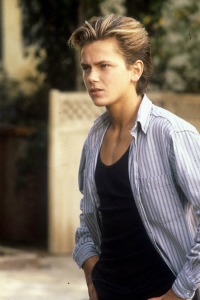 It was almost eighteen years ago that acclaimed young actor River Phoenix died suddenly in front of his friends and family of a drug overdose. He was in the midst of filming a drama entitled Dark Blood with Dutch film director George Sluizer. Sluizer now wants to complete the 1993 drama for release next year, with the help of Phoenix’s family.

River Phoenix was just 23 years old and enjoying an evening out with friends during a break in the film’s production. He was at the Hollywood club The Viper Room when he suddenly collapsed in front of brother Joaquin and sister Rain. Actresses Samantha Mathis and Christina Applegate were also at the club that evening. It was later determined that the actor had taken an overdose of cocaine and heroin.

Sluizer stopped production on Blood, and locked the footage away.

Since then, he contemplated using the raw footage for a documentary on young Phoenix’s life, but decided to revisit his unfinished work again after touching base with the family and noting the similarities between River and brother Joaquin. He believes that Joaquin could dub his voice into the footage and finish the film.

Said Sluizer, “The voices of both brothers are very much alike.”

Dark Blood chronicles the life of a young widower/drifter named Boy, played by Phoenix, who lives as a hermit on a nuclear testing site. He comes to the aid of a young couple whose car brakes down in the desert and ends up in a love affair with the wife. The couple was played by Jonathan Pryce and Judy Davis.

If the Phoenix family agrees and Joaquin does finish his brother’s last work, the film could be released some time in 2012.