Kenny Wormald may be a dancer-turned-actor, but that doesn’t mean he wants to follow in fellow hoofer Channing Tatum’s footsteps. He would rather blaze his own path in the industry, one meaty role at a time. 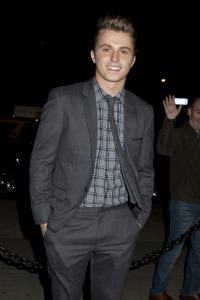 It has taken the better part of ten years for Kenny Wormald to get the recognition he deserves. As a principal dancer for everyone from Madonna to Mariah Carey, JoJo, Christina Aguilera, Chris Brown, Nelly Furtado, Prince, the Pussycat Dolls and Justin Timberlake, he has seen both the highs and lows of the business. He struggled for years to make enough money to pay the rent and now, as the star of the smash hit Footloose, Wormald is enjoying every moment of his “new” celebrity.

Said Wormald to the Los Angeles Times, “I’ve been out here for nine years and it’s been a struggle. Rent, even up until a while ago, was a struggle. I used to make like 500 bucks shooting a music video. And if I taught, I’d make $90 and hour. I make more than that now and if I need to teach, I will.”

Although both Wormald and co-star Julianne Hough went into this major project with little or no acting experience, they had a gem in acting coach Cameron Thor, who worked with the two. Thor had Wormald watch scenes from James Dean films for inspiration and surprisingly, the silent but critical interaction between Heath Ledger and Jake Gyllenhaal in Brokeback Mountain.

But as always, there are comparisons to be made. The name Wormald hears most is Channing Tatum, who also started out as a dancer in 2006’s Step Up and has since gone on to forge a lucrative movie career, appearing in films such as Public Enemies and Dear John.

Wormald can clearly see how the two could be compared, but states in response, “I’m not trying to mimic his career by any means, but I’d like to do some of the [stuff] he did. Like even that one scene in Public Enemies…yeah, I’d do that right now. I want to do, like Rounders or some Ryan Gosling-type stuff.”