French president Nicolas Sarkozy and his wife Carla Bruni-Sarkozy welcome a daughter in Paris, however he is not revealing many details, calling the birth “private.” 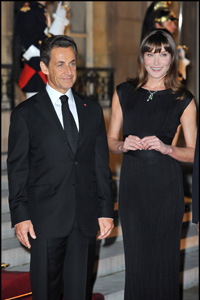 It’s a girl for French First Lady Carla Buni-Sarkozy, 43, and her husband, French President Nicolas Sarkozy. The happy couple welcomed their daughter, whose name has yet to be released, at 8 p.m. at the Clinique de la Muette in Paris, France.

Sarkozy said he is not going to reveal her name because he wanted to leave that to his wife.

“All of you who are parents can understand the very deep joy that Carla and I feel. Each one of you can also understand that it’s an even deeper joy because it is private,” he told reporters. “We have been lucky to have a very happy event take place. I will just keep to these few brief words to say to you that they are doing very well.”

The couple did not find out the sex of the baby before she was born. “That, I don’t even know myself,” she told reporters when asked. “There are certain things which one should keep secret.”

This is the first child for the couple, however Carla has a 10-year-old son from a prior relationship with boyfriend Raphael Enthoven and the French President has three children from a previous marriage – and is actually a grandfather.

Baby girl Sarkozy is actually the first child born to a French ruling leader since Napoleon’s time! “I guess it’s the modern world going into the French Republic, which is not bad,” Carla told the BBC.

Don’t hold your breath for photos of the baby, Carla had said she is not releasing photos because the French people would not be interested in them.

“So many women are expecting children and giving birth, and it’s so uninteresting for French people,” she tells the BBC. “It’s great news for me, but it’s also something very banal.”

Many have enjoyed following Carla’s pregnancy and classic maternity fashion, however the former model said she hasn’t spoken much about her pregnancy for a reason. “I’m superstitious, so yes, I’ve been very careful,” she reveals.

Carla confirmed her pregnancy this past July, after she was spotted with a baby bump while wearing a bikini, saying the pregnancy is “coming happiness, unexpected and unhoped for.”