Daniel Radcliffe has left Hogwarts to take a turn exploring the creepy side of supernatural in the film adaptation of Susan Hill’s The Woman in Black.

A second trailer for Daniel Radlciffe‘s The Woman in Black has been released! The latest from the film, due out Feb. 3, 2012, finds the boy once known as Harry Potter exploring the depths of the secluded (though not uninhabited) Eel Marsh house. Watch below! 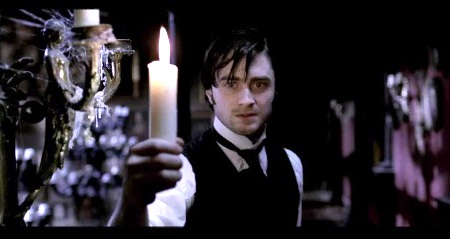 Speaking of The Woman in Black‘s creep factor, Danie Radcliffe says, “To be honest, if I wasn’t in it myself I’d probably be too scared to see it. There are moments when people do jump out of their seats, but there are also the subtler moments when you just find a chill running up your spine and you’re not quite sure why.”

The choice to film The Woman in Black, a successfully scary stage play in its own right, is an interesting one for the Harry Potter franchise star. In 2007 Daniel Radcliffe began appearing on stage in plays such as Equus and the 2011 Broadway revival of the musical How to Succeed in Business Without Really Trying.

Check out Daniel Radcliffe in his first post-Harry Potter film, The Woman in Black:

Do you think Daniel Radcliffe is doing a good job of breaking out of his Harry Potter image?