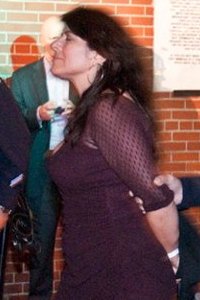 Naomi Wolf, author of the groundbreaking feminist tome The Beauty Myth, was arrested while sticking up for the Occupy Wall Street protesters at the Huffington Post Game Changers event Tuesday night, according to a report in the New York Post.

Members of Occupy Wall Street were protesting giving Andrew Cuomo a New York Game Changer award. When police moved to clear the sidewalk of the protesters, Wolf, who attended the event, crossed lines and stood with the protesters.

“The protesters were being told that they needed to leave the sidewalk outside of the Huffington Post event because ‘Huffington Post had a permit’ to control the use of the sidewalk,” posted Wolf on Facebook. “I have a chapter in Give Me Liberty on NYC permits so I knew that could not be accurate. Sidewalks are public spaces and can’t be leased by private entities. I asked for a copy of the permit.”

That’s when she was arrested.

Wolf, a Huffington Post contributor, later speculated on the cause of her arrest.

“I just learned from an informed source that the permit that the cops invoked as a grounds for arresting my partner and me for walking peacefully on a public sidewalk was one that the Huffington Post had secured (appropriately) for a possible red carpet and pylons, which they did not choose to set up,” Wolf said. “They were apparently not informed about the arrests at the time — arrests whose legitimacy was ascribed to ‘their’ permit.

“I have been at many such red carpet events and pedestrians pass peacefully by on the sidewalk.”

Wolf and her companion were released. Wolf has also been an advisor to Bill Clinton and Al Gore.