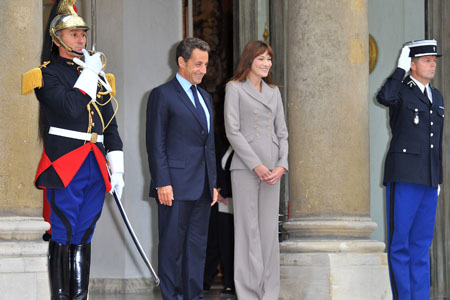 “It happened between 7:00 and 7:30 p.m. Everything went well,” a source told the AFP. The name of the baby is not yet known, according to another source.

Sarkozy and Bruni weren’t even aware of the child’s sex before her birth. “We’ve arranged for it to be a big surprise. Obviously, a nice surprise,” Bruni said in a recent interview.

Sarkozy rushed to his wife’s side after jetting off to Frankfurt, Germany, earlier in the day to discuss Europe’s financial crisis. He made it back about three hours after the birth, according to sources.

Bruni recently revealed that having a baby is a nice distraction from the problems plaguing her country and continent. “We’re in a time of crisis, but if human reproduction was decided by thinking about whether you’re going to have a perfect life, we wouldn’t be here to talk about it, neither you nor I,” the Italy-born first lady said.

“What’s more, I think that the survival instinct is also expressed by the desire to have a child.”

Don’t make a mistake, though: Baby girl Sarkozy won’t be accompanying her parents on official outings.

“I will do everything to protect this infant and I’ll be absolutely rigorous. I will never show photos of this child, I will never expose this child,” she told French television. “I understand the media interest (but) for children it’s not possible.”

“You don’t have a child for the gallery,” she added.