SheKnows gets the scoop from Paranormal Activity’s Katie Featherston about how things are not as they always seem in the third installment of the blockbuster horror series.

Paranormal Activity 3 has a secret… 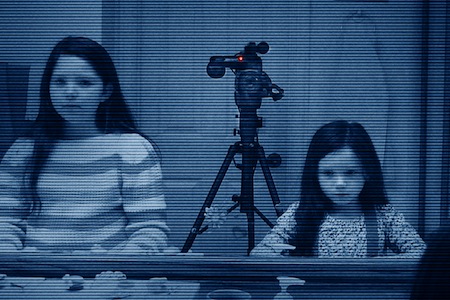 And, it’s not just the story that you’re about to hear of two sisters whose family is haunted by a demonic presence. There are clues in this third installment of the Paranormal Activity fright franchise that even the filmmakers don’t want you to know about.

In an exclusive SheKnows interview, actress Katie Featherston, who plays a woman named “Katie” in the first, second and briefly in the third film, reveals a clue to one of its secrets.

“You have to really look to find it,” she whispers from the red carpet before a midnight screening of Paranormal Activty 3 on Sunset Boulevard in Hollywood, fans screaming behind her. These fans have been waiting hours behind barricades just to get a peek at the film and its stars.

Featherston, the 29-year-old actress from Texas, couldn’t be more pleased that she landed the role in the low budget series that has become a million dollar box office success. “It’s really changed my life.”

When asked if she knew anything particular about the series that hadn’t been previously released to the public, she let us in on one bit of filming lore about a certain location in the movie.

When filming a scene for the new film, the production crew had to go back and re-build a location that had been used in one of the previous films. The decided however not to build it exactly the same. What changed about this location, and why…?

If you’re a die-hard fan or just curious about one of the scariest films out this Halloween season, this is one interview you do not want to miss.