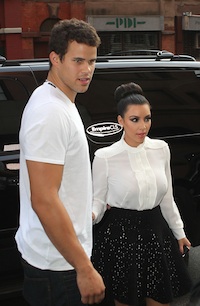 Multiple insiders reveal Kim Kardashian and her new husband Kris Humphries are on a path for splitsville. While Kim puts her work ahead of her marriage, NBA star Humphries is hitting up bars and after-hours clubs while she’s away.

It’s no secret Kim Kardashian loves to work. That’s how the Kardashians made it to the limelight — good old fashioned pushing and shoving their way to the top. Yet, will Kim’s addiction to her work result in the sacrifice of her marriage? Kardashian and Humphries were married in an over-the-top ceremony, televised of course, just two months ago. Since then, Kim has certainly put in the time to bring home her massive paychecks: from DASH stores opening up across the country, to workout DVDs, to her recent fragrance launch.

Last year she told Forbes Magazine, “I really pride myself in being committed one-hundred percent..I am hands-on in any project that I am associated with. I just don’t want to put my face or name and lend it to a product that I’m not behind a hundred percent.”

Kris Humphries doesn’t seem to be as appreciative of her work ethic as her clients are. Recently, Kim flew to Dubai for a fashion show and hotel launch while Kris partied the week away. He was spotted at Lavo and Avenue, then hit-up the after party scene at 1Oak — hand-in-hand with a blonde family friend. Even more revealing, Kris couldn’t even be bothered to meet Kim at the airport. Instead, he had lunch at PS 450 with friends.

Life & Style magazine even has a source who says Kim is planning to spend the holidays sans Kris.

“Kim’s mapping out 2012, including holidays, and Kris isn’t a part of it. Any itineraries for the future don’t include Kris very much. That’s not a good sign.”