A no-name extra on the set of Snow White and the Huntsman reports that Kristen Stewart was injured while filming. 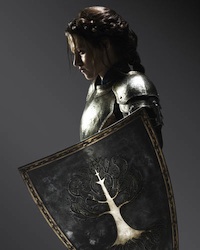 Kristen Stewart was injured on the set of her new movie, Snow White and the Huntsman this afternoon. Production was stopped and may resume on Friday, but insiders are unsure.

News of Stewart’s injury came via Max Manganello, an unknown actor who plays a soldier in the film. He tweeted about her injury which was immediately picked up by multiple news outlets.

“It’s a wrap for today. Kristen hurt herself…nothing scary. We shoot on friday.”

Hmm, perhaps Manganello tweeted the report in hopes of getting a little free press for himself? Maybe, but executives were apparently not happy with him because the tweet was deleted just as soon as it appeared. Thankfully, E! nabbed a screen shot so the injury report’s confirmed. What exactly did Kristen Stewart hurt? That’s being kept sealed, but it must not be too serious for producers to feel it’s safe to resume filming after just a few days of rest.

The role of Snow White has proved to be physically demanding for Stewart. She agreed to perform all her own stunts, of which there are many, since the movie is a much more action-packed than the fairytale many of us are familiar with — thanks to Disney.

In what Universal Studios calls a “gritty adaption of the classic,” Snow White (Stewart) is banished to the woods by the evil queen (Charlize Theron) and ordered to be killed by the Huntsman (Chris Hemsworth). But the Huntsman falls in love with Snow White and the result in an attempted overthrow of the Queen.

Stewart noted in an interview with Box Office Magazine that her character has to be both a tough heroine and a loving soul, which can be a difficult balance given the action theme of the movie.

“It’s hard to play an action hero who is also the most compassionate person on Earth. You can’t hate. You epitomize bleeding hearts, so how the (expletive) do you do an action move like that?”

“Basically, I’m fighting evil — I’m fighting the most evil villains. It’s anguish. She (Snow White) takes absolutely no pleasure in ever hurting anything.”

Snow White and the Huntsman opens in summer 2012.