Prince Harry is busy earning the respect of his military peers during his time in the United States. 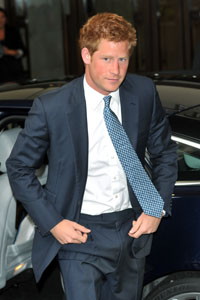 Prince Harry is doing more with his time in the United States than just impressing the ladies — he’s impressing his military trainers, too!

The 27-year-old redhead is in the U.S. with 20 other British soldiers to train at the Naval Air Facility in El Centro, California. The exercises — based in the dusty bowels of the U.S.-Mexico border — are intended to train Harry and the other soldiers in Apache helicopter maneuvering in Afghanistan.

“It sounds like a con, but Harry is genuinely shaping up to be one of the best young Apache pilots this country has ever seen. His US instructors have to treat him the same as everyone else, as we all do in the British Army. But they have turned round and said, ‘My God, this guy is the real deal,'” the source said.

Prince Harry — a Captain in the British Army — has a true talent for the military. “His handling, hand-eye coordination, reaction speeds — he’s a natural,” the source said.

“There are many skills needed to be a top-drawer Apache pilot, but apparently it’s Harry’s flying that is particularly impressive,” another source said. “Any doubters who said, ‘Harry is Royal — he’s getting special treatment’ can leave the room now. His talent is leaving his trainers open-mouthed.”

Prince Harry will put the skills he’s learning to use soon: he’s set to head back to Afghanistan next year, according to a royal spokesperson.

We have a better idea for you, Harry: stay in the United States, we love you!