Whitney Houston returns to the big screen in the remake of the 1976 hit Sparkle. 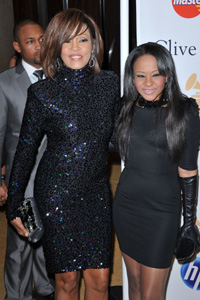 Whitney Houston may have had a hard time getting to Detroit to start filming her new movie, but now that she is there she is ready to work on Sparkle.

Houston raised eyebrows when she got into an altercation with a Delta Air Lines crew on her way from Atlanta to Detroit when she refused to buckle her seat belt. The flight attendants put up with her diva attitude and even fastened it for her, but a source says the singer was simply “exhausted.”

Now that she is in Detroit, she is excited to have a supporting role in the movie Sparkle, where she plays a gospel singer and will even perform a couple of songs!

“Sparkle is a movie I have wanted to remake for a long time and I am so glad to finally see my wish come true and to be part of this stellar team of actors and producers,” she said in a statement. Houston, pictured here with her daughter Bobbi Christina, also happens to be serving as executive producer of the movie, along with Gaylyn Fraiche.

Sparkle will undoubtedly have a great soundtrack, with R. Kelly contributing the music for the movie.

Houston was amazing in 1992 in The Bodyguard, starring Kevin Costner, and the movie had an equally amazing soundtrack. Do you think Sparkle will be Houston’s comeback movie?