A judge has revoked Lindsay Lohan’s probation and now the star could spend a year and a half in jail. 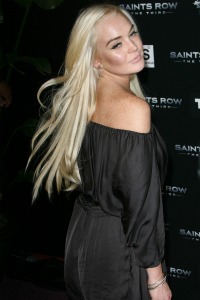 The jig is up for Lindsay Lohan. A judge found the star in violation of her parole for being kicked out of the domestic violence program where she was to complete community service — and now Lohan could be facing a year and a half in jail!

Lohan was led out of the courtroom in handcuffs by a bailiff after Los Angeles Superior Court Judge Stephanie Sautner scoffed at the actress’s progress report.

The judge said that Lohan “blew off” her community service, completing just 21 hours of the 360 she had been ordered to complete and missing nine appointments with the downtown women’s center before they told her not to come back.

“I thought she could be of value to the downtown women’s center but obviously not” Judge Saunter said. “She has to do 56 of 60 days [of community service] with six months already gone.”

“How many violations have there been?” Sautner pondered. “Probation is a gift, not a right.”

Lohan, wearing heavy makeup that aged her remarkably, was led out of the courtroom in handcuffs. But she won’t be spending the night in jail quite yet: Her lawyer Shawn Holley had a bail bondsman at the ready. The judge set bail at $100,000.

The troubled actress was ordered to complete 16 hours of community service before her next court date on Nov. 2, where it will be decided if she will go to jail and if so, for how long. While she could wind up behind bars for as long as a year and a half, the judge noted with frustration that overcrowding and new sentencing laws would make that unlikely.

By the way, Lohan showed up to court wearing a white sleeveless Fendi dress, gold Giuseppe Zanotti shoes and a gold Chanel purse — a far cry from the poverty she was pleading when she claimed she could not afford the psychiatric counseling she was ordered to undergo as part of her sentence over the summer.

“Lindsay is hoping this matter will be resolved on Nov. 2 and the court will reinstate probation and allow her to continue fulfilling her community service,” a rep for Lohan said.