Queen Elizabeth made the long journey to Australia Wednesday on an official 10-day visit. Will this really be her last visit to the country?

Queen Elizabeth touched down in Australia Wednesday to make her 16th — and likely final — trip to the British colony. The Queen and her husband, Prince Phillip, were welcomed from their plane with throngs of well-wishers waving Australian flags, according to the Associated Press. 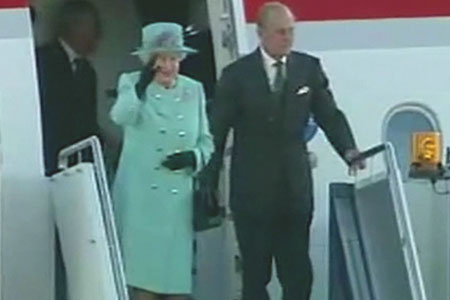 “While the queen is here in Australia, what Australians will be doing is enjoying and celebrating her presence here,” Prime Minister Julia Gillard told reporters before the royal couple’s arrival.

“I believe she’s very well respected by Australians and I think she’s going to be tremendously warmly received from the moment that she sets foot on Australian soil.”

Queen Elizabeth last visited the country in 2006. This time, the 10-day tour will take her to Melbourne, Perth, Brisbane and the official royal residence in Canberra.

Australians are more than happy to stay under the British Monarchy — a 1999 vote to make Australia a republic failed.

“It may be the last visit for the Duke of Edinburgh, but she’s got plenty of energy,” Australian Narelle Gibson told the AP, referring to the 90-year-old prince. However, the Queen is 85, leading many to believe that her health won’t allow for another visit either.

Others hope that her visit will show the British Monarchy that Australia needs to be independent, regardless of public opinion.

“Hopefully, while she [the Queen] is here, people will pause to consider that we have absolutely no say in who our head of state is, and ask themselves whether a constitutional monarchy is appropriate for Australia in 2011,” said Mike Keating, chairman of the Australian Republican Movement.

However, the Queen’s biographer said she doesn’t care one way or the other.

“She has not minded when Commonwealth countries have dropped her as head of state, but she does mind if they leave the Commonwealth,” author Hugo Vickers said.

Read on for more Queen Elizabeth