Back from a Swiss vacation, Natalie Portman and baby Aleph are spotted in Los Angeles. 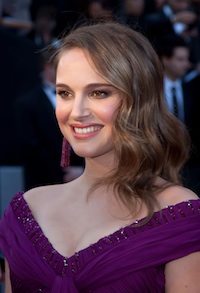 Natalie Portman spent the day with her fiance, Benjamin Millepied, and new baby, Aleph, yesterday. The happy family was spotted at the popular Farmer’s Market. Portman, a vegetarian, picked up several fresh fruits and veggies.

Sources report the Black Swan actress looked very low-key and casual. Wearing jeans, a t-shirt, a simple corduroy jacket, and sporting no makeup, Portman looked more like a regular mom than an A-list Hollywood star while grocery shopping. However, she was very protective of Aleph — he was completely covered-up while Portman cradled him close in his navy baby backpack. Witnesses report she was all smiles and very friendly.

Portman, who is engaged to Black Swan choreographer Benjamin Millepied, is taking it slow these days. She was absent from the 2011 Spike TV Scream Awards, where she picked-up the Best Fantasy Actress honor for her role as Nina Sayers in Black Swan. The critically acclaimed film also won Best Director (Darren Aronofsky). Entertainment Weekly also reports Portman turned down a role in an upcoming independent film, Adaline.

The last time Natalie Portman was spotted with Aleph was in September, when the pair were out and about in Geneva, Switzerland. Aleph was born in June and the family took some time to travel around Europe. Portman and Millepied, who is French, began dating in 2009 and became engaged over the Christmas holidays in 2010.

Third time’s a charm: Tori Spelling has a baby girl

Milla Jovovich has model dreams for her daughter