Courtney Love looked a bit disheveled with a tag hanging out of her jacket as she was presented an award at a university in Ireland.

Courtney Love was presented with an Honorary Patronage of the Philosophical Society at Trinity College in Dublin, Ireland. The Hole singer attended the college for two semesters when she was a teen, and joins other celebrities — including Al Pacino, Salman Rushdie and Bob Geldof — who have all received the award from Trinity College. 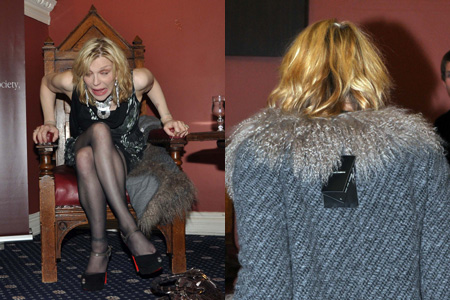 The award honors those “whose contribution within their sphere is considered exceptional” and those who receive the award are given the responsibility of “protecting the Society and using their good names to ensure its continued survival”. 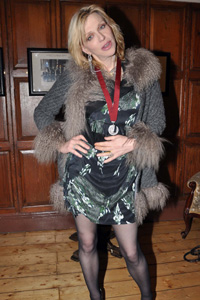 Love, who has battled drugs and alcohol in the past, looked a bit disheveled and out of it during her appearance. She wore a printed black and green dress paired with a feathered Dolce and Gabbana jacket — and she forgot to take the tag off. The tag was hanging out the back and was clearly visible.

This isn’t even the first time she has worn that jacket. She was photographed two days earlier wearing the same Dolce and Gabbana jacket during her appearance on The Late Late Show in Ireland.

In other Courtney Love news, the actress has been sued for failing to return $113,700 worth of Jacob & Co jewelry that she wore on Sept. 22, 2010 to a New York benefit. Celebrities will often borrow jewelry for a special event, but are required to return it. Love said she gave it to the staff of the Mercer Hotel to return to Jacob & Co, however they said they never received it.