Wayne Newton’s 40-acre estate in Las Vegas to be opened to the public for tours. 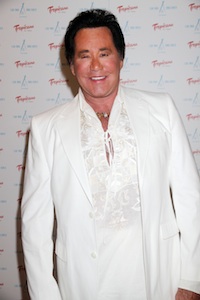 The Associated Press reports Wayne Newton is opening up his palatial Las Vegas mansion to the public this winter. And it’s not a temporary gig — the 10,000-square-foot home, situated in a private and exclusive neighborhood, has its own name and will be a year-round tourist attraction.

Newton said it’s been a dream of his to allow the public into his estate, called Casa de Shenandoah. The attraction will employ 400 people and the estate kept as-is, with a few additions to make it more commercially viable — such as a museum, theatre, and visitor’s center. In fact, Newton will perform at the estate from time-to-time.

If it seems odd that Wayne Newton’s home would be turned into a tourist destination, it may make more sense once you know the details of his lavish home. It sits on 40 acres and features exotic animals roaming the property — like Arabian horses and South African penguins.

Inside, Newton displays rare and one-of-a-kind items from his famous friends: Nat King Cole’s watch and a Johnny Cash guitar are just some of the amazing mementos found throughout the home. If you’re not a fan of the Vegas memorabilia, feel free to gaze at the many priceless, original Renoir paintings gracefully hung on the walls.

While Wayne is certainly excited, his neighbors are not too happy. Their concerns — over noisy tour traffic and blocked parking from tour buses — actually resulted in several construction permit delays. Newton understands their frustrations but thinks they are overreacting.

“The last thing I have ever done is infringe on my neighbors. I’ve heard people say that we are building a monument to myself. Get serious. It’s not that important.”

Wayne Newton started singing in Las Vegas when he was 16. He’s now 70.