Taylor Swift is insistent upon her single status, but is it possible the country star protests too much? Ellen DeGeneres gets to the bottom of things. 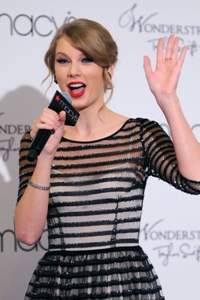 Taylor Swift appears on Wednesday’s episode of the Ellen DeGeneres Show, and the young country star’s love life is put under scrutiny.

Though the 21-year-old has been romantically linked to famous names such as Chord Overstreet and Jake Gyllenhaal, Taylor Swift insists she’s single and has been staying busy promoting her new scent Wonderstruck.

Getting straight to the point, Ellen DeGeneres asks Taylor, “Does your boyfriend like the way [Wonderstruck] smells?”

“I don’t have one! I keep telling you that,” the singer replies. “I just don’t … You’d know if I had a boyfriend. I, for real, don’t have a boyfriend. I sit by myself and I watch Law & Order.”

DeGeneres, not afraid to call it as a comic sees it, replies, “That’s pathetic.” The host continues, “You’re busy. You’re very, very busy but you’re OK with that. You have time. You have plenty of time.”

Swift agrees, “You have to be OK with it. If you’re the girl that needs a boyfriend and once she loses that boyfriend needs to replace it with a different boyfriend, it’s just this constant stream of boyfriends all the time. I don’t feel like I ever want to be that girl. I want to be the girl that when she falls in love, it’s a big deal and it’s a rare thing.”