Hip-hop star Soulja Boy is a free man. The rapper, who was recently arrested on drug and weapons charges, is currently out on bail.

DeAndre Cortez Way, better known as Soulja Boy, is back home. On Tuesday, the hip hop star was released on bail following a highly publicized arrest. Despite the mounting evidence, the rapper claims he’s innocent of all charges. 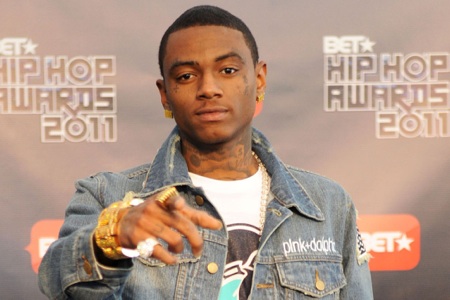 On Tuesday, Soulja Boy was pulled over by police officers in Temple, Georgia after they spotted a broken tail light on his Cadillac Escalade. The incident led to the discovery of $46,000 in cash, three guns and over five ounces of marijuana.

After being booked and processed, Soulja Boy was eventually released on $10,000 bond. While awaiting his exit from Free At Last Bail Bonds, about 50 fans stood outside in support of the rapper. Upon his release, Soulja Boy continued to stress his innocence. According to CBS Atlanta, he told the public, “I’m innocent, man. I love you all. I just want you’ll to know I’m innocent.”

Oddly, the same day Soulja Boy was arrested, his new direct-to-DVD film was released. It’s called Soulja Boy: The Movie and it couldn’t have debuted at a more inopportune time. The artist had to cancel all promotional events due to his legal troubles.

He tweeted, “I missed 10 interviews today for my new movie! To those companies I’m sorry! You can see I had a lil situation. The show must go on.” He also thanked his fans for sticking by him throughout his ordeal. “Thank you and I’m sorry. Love you forever, seeing your letters and you standing outside that jail made me feel the love. My fans r the best,” he wrote.

This isn’t the first time Soulja Boy has been in hot water. He previously suffered a serious backlash after slamming U.S. troops in one of his songs.