Kelsey Grammer has brushed off his Frasier Crane character for a more sinister role in Boss.

Kelsey Grammer’s new role as corrupt mayor Tom Kane in the Starz series Boss is a far cry from the eccentric, yet likeable character Dr. Frasier Crane. In Boss, Grammer plays the mayor of Chicago — who lies and cheats his way to the top, despite battling a progressive neurological disorder. 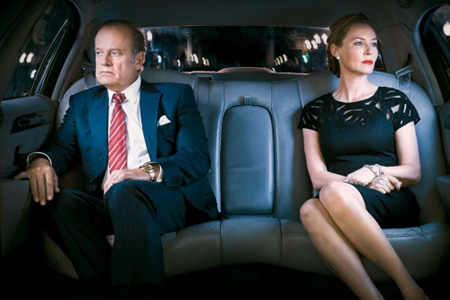 “Basically, he’s Lear,” Grammer says, referring to Shakespeare’s King Lear. “That being said, we don’t want to pigeonhole it so that people say, ‘Oh, they’re trying to make a King Lear story.’ It’s a tragedy about a man who is not necessarily a tragic figure at first, but will become that as he learns to love. That’s my idea of where this character is going.”

Connie Nielsen plays his estranged wife in Boss, while Hannah Ware plays his daughter caught in the middle. Kathleen Robertson (Beverly Hills, 90210) plays his aide, Jeff Hephner his state treasurer and Martin Donovan embraces his role as the chief of staff.

Grammer is an executive producer of the show and said he began working on it “sometime after my marriage at the time was falling apart,” referring to his divorce from Real Housewives of Beverly Hills star Camille Grammer.

The four-time Emmy winner is taking a huge departure from his character in Frasier — and it seems Grammer enjoys that about the role. He describes his character Kane as “a genius at understanding how to push or manipulate somebody. I don’t even know that it’s always conscious what his skill is, and the malady he is dealing with suddenly challenges his trust of himself. That’s what makes him such an interesting guy to play.”