Rick Ross bails on event last-minute due to seizures. 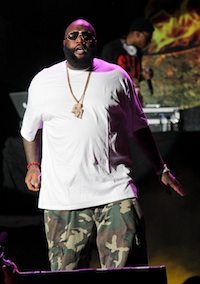 Rick Ross canceled an Atlanta concert after health continues to be an issue. He was scheduled to appear Friday at Georgia State University for their annual homecoming bash.

Concert director George F. Baker III spoke to a local station and has no hard feelings. “We are disappointed he had to cancel, but completely understand that Rick Ross needs to take care…himself at this time. We hope he is better soon.”

Unfortunately for Georgia State students, there isn’t enough time to bring in another performer.

Ross is also scheduled to perform with Busta Rhymes in Los Angeles on Sunday. No word yet on if he will show or will need more time to continue his recovery.

His health seems to have begun deteriorating last week. On Friday, he had a seizure on a Delta flight from Ft. Lauderdale to Memphis. (He was scheduled to perform at the University of Memphis). The plane made an emergency landing in Alabama and Ross was transported to the emergency room. After being released, Ross suffered another seizure and returned to the hospital. He was discharged later that evening. No cause was released to the media.

After his second release, TMZ reported Ross returned to Alabama on his tour bus to avoid another health scare while in the air. Twitter pictures surfaced apparently showing the rapper in good spirits.

His rep still has not released a statement concerning Ross’ current condition. The cause remains unknown to speculators, who suggest it could be any number of issues. The New York Times stated “unusually high levels of sodium or glucose in the blood, kidney or liver failure, and drugs and alcohol” could be to blame. There’s also hypoxia, which can affect people while airborne, which results from a lack of oxygen in the blood stream.

It’s not clear if Ross canceled the Atlanta event because of another seizure or complications arising from the past two.