Biggest Loser contestant Sam Poueu is recovering and has been transferred to a rehabilitation center. 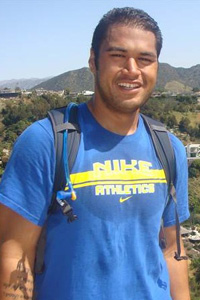 Biggest Loser contestant San Poueu from season nine has been transferred out of the hospital and into a rehabilitation center after he fell from a four-story apartment building. The 25-year-old was critically injured with head trauma and internal injuries requiring three surgeries.

Poueu, who lost 136 pounds on the show, was on the rooftop of his friend’s apartment building when he got locked out. He attempted to climb down the fire escape and fell four stories.

“He is undergoing an intense rehabilitation schedule. His recovery has been nothing short of a miracle,” his family and fiancée Stephanie Anderson said in a statement. “He has been blessed with a wonderful medical team. Witnessing his daily progress is the most hopeful and inspirational experience. Tough days are still ahead –but, like always, he is working hard towards a full recovery. We are thankful for your continued thoughts, prayers and support.”

Poueu will be undergoing intense physical, occupational and speech therapy at the rehabilitation center. “Words can’t express how grateful I am for all the love, support and prayers I’ve received in the past six weeks, all of which have been instrumental in my healing and recovery process, and in keeping my spirits up,” he tells People.

Poueu met Anderson while she was also a contestant on season nine of Biggest Loser. He and Anderson live together and he actually became a personal trainer and helped her reach her target weight.

“Sam Poueu is a beloved member of our Biggest Loser family and we are keeping him and his family in our thoughts and prayers,” a spokesman for Biggest Loser said.