A sea of boos erupted from the Dancing with the Stars audience after Carson Kressley’s Tuesday night elimination, but don’t feel bad for the fashion-man — he’s going to keep on dancing.

Carson Kressley took his Dancing with the Stars elimination like he took his time on the dance floor — with a positive outlook. 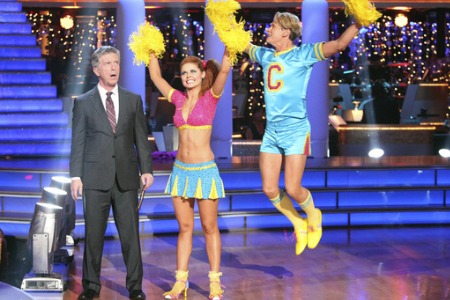 When Carson Kressley and Anna Trebunskaya were eliminated from Dancing with the Stars Tuesday night, boos could be heard from every which way — and that was just from the audience.

Us Weekly caught up with Kressley backstage, and let’s just say he saw the elimination coming: “[Anna and I] were like, ‘We’re toast… we’re a crouton,'” he told the magazine.

Carson kept things light during his time in the ballroom and his exit was no different. He joked with Us Weekly in regards to the video montage, “I was like, ‘Oh my God, it’s like I’ve died!'”

Despite knowing he was “toast,” Carson Kressley is taking a lot away from his time with partner Anna Trebunskaya.

Kressley said of his pro partner: “Anna’s so patient and so kind — she’s like a hot Mother Teresa,” adding, “This process has made me so aware of my body, my posture [and] the way your clothes fit and how people move and charisma and confidence. I’m going to keep dancing!”

Carson and Anna plan to continue the friendship they have forged for a very long time.

Kressley said, “We have a really special bond because we spent hours and hours together. She’s probably going to name her first baby after me. Boy or girl, it works either way.”

Some of his dancing co-stars took to Twitter to show their disappointment over Kressley’s exit. Rob Kardashian tweeted, “You will be missed @CarsonKressley! :(.”

What did you think of Carson Kressley’s Dancing with the Stars exit? Even though he knew he was “toast” do you think he still deserved to go home?

Some rumblings are claiming Hope Solo should have gone home. Head over to our comments section and sound off.