Kellan Lutz says he is not gay, despite the rumors. The actor sat down with The Advocate to discuss what he sees on the internet, how women relate to him, and his ideal roommate. 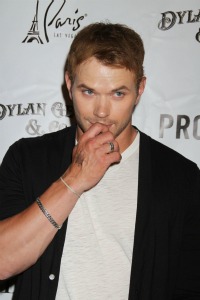 Put the blind items down. Kellan Lutz would like all the ladies out there to know that he is not gay — but he loves his gay fans.

The Twilight star sat down with The Advocate to chat about his love life and those pesky rumors.

“I don’t Google myself, but I’ve heard that people think I’m gay… Most of the girlfriends I’ve had have come after me. So it’s really funny when girls get offended because I don’t hit on them,” the 26-year-old Lutz said.

“They’ll transform their insecurity into, ‘Oh, that makes sense, because I heard you’re into guys and have a boyfriend.’ I’m like, ‘Seriously? That’s your tactic to get me to like you?’ There will always be rumors, but I know who I am.”

Lutz says that despite his own heterosexuality, gay fans are his favorite.

“Oh, they’re the best. I love them,” he said. “When I meet gay fans out and about, they’re so great to talk to — and I’m big on hugging, because I’m from the Midwest.”

“I’m proud to have those fans, and their support means a lot to me. I don’t want just girls coming to my movies; I want guys to come too.”

Looking for a roommate? Lutz might shack up with you — if you’re gay. The star says he doesn’t want to live with straight guys anymore because they’re slobs.

“Honestly, I’d prefer to live with gay guys,” he said. “They’re the cleanest, and they just take care of stuff. Because I’m always away, coming home to a clean house means a lot to me. Trust me, I’ve lived with a lot of roommates, and straight guys are just kids who don’t pick up after themselves.”

Catch Kellan Lutz in The Twilight Saga: Breaking Dawn Part 1 when it is released in theaters on Nov. 18, 2011. In the meantime, check out this set of new Breaking Dawn photos just released yesterday!