The world is finally going to get a glimpse of Hollywood’s most famous newborn twins — even if it will only be the backs of their heads. 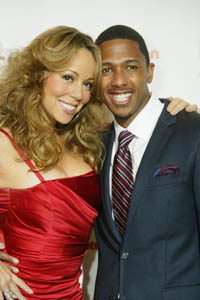 Mariah Carey and Nick Cannon will reveal their twin babies to the public almost five months after they were born in an interview with Barbara Walters on 20/20 this Friday.

The couple’s children, Moroccan Scott and Monroe, were born last April and have since been shielded from the public view by their famous parents — even in promos for the upcoming interview, their faces were not revealed.

Earlier this summer, chart-topper Mariah gave her fans just a glimpse of daughter Monroe when she posted a picture on her Twitter account of the celebrity tot covering her face with her hand along with the caption, “No pictures darling.”

In the interview, the 41-year-old singer discusses with Walters parenthood and her marriage. Mariah revealed that her nicknames for her two children are Roc and Roe and that she “sometimes” trusts her husband of three years, Nick.

Nick meanwhile says that their children are beginning to show their personalities, with daughter Monroe acting a lot like her famous mother.

“My daughter is a diva. My son is laid back. When he wakes up, he wakes up smiling. He’ll wait for a minute and if he’s hungry, he’ll let you know,” the doting father said.

“My daughter is just instant, she goes in and will not stop crying until you give her what she wants. It’s like sleep and then screaming,” he adds.

Mariah, who has been working hard to regain her pre-pregnancy figure, also discusses her fitness challenge and the difficulties her body went through during her pregnancy with the twins during the sit down with Walters.