Justin Bieber is not be allowed to rap lyrics written by anyone but him, says BET. 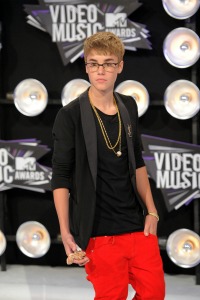 Justin Bieber just received a crushing blow to his street cred: The Under the Mistletoe singer was not allowed to rap at the BET Hip Hop Awards last week because he wanted to use rhymes written by Ludacris, not himself.

Bieber wanted to take part in the cyphers, a pre-taped roundtable rap segment. Problem is, unlike in other forms of music, rappers only have credibility if they use their own work.

In a radio interview posted on his blog, DJ Premier said, “Justin Bieber even asked if he could do the cypher. Everyone was worried that that might mess up the integrity of BET. I was like, ‘As long as he got a dope rhyme, let him spit.’ But then we heard, ‘Oh, he wants Luda to write his rhyme…’ And I was like, ‘Oh, no, no, no, no, no. If you ain’t writing your own rhyme, you can’t do it. So, Justin you got to take a back seat. Write your own rhyme, Honey. You got to call him honey on that one.'”

While the awards show featured seven groups of cyphers including superstars like Eminem, Busta Rhymes, Ludacris and Chris Brown, the Biebs was not among them.

All is not lost for the young performer, though. He is slowly but surely trying to build up his hip hop credibility. Last year he teamed up with Kanye West and former Wu-Tang Clan member Raekwon in the Runaway Love remix, and his alter ego Shawty Mane joined Chris Brown on Ladies Love Me.