The pieces of the Revenge puzzle are starting to come together — can you guess who’s next?

As we continue to connect the dots of Emily Thorne’s plan, we have to ask — who’s her next victim on Revenge’s new episode “Guilt.” 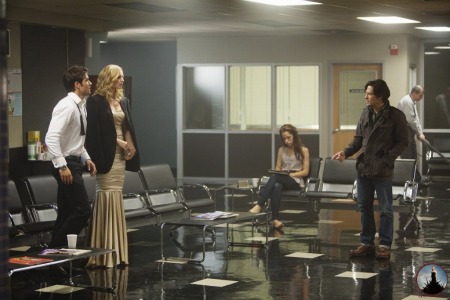 Last week on Revenge, Emily Thorne (Emily VanCamp) took the shrink who institutionalized her as a child and made an example of her.

With the fall out of Victoria and Charlotte’s relationship still looming and Daniel’s college buddy still sniffing around, Emily is moving on to her next target this week in an all new episode entitled “Guilt.”

ABC officially describes “Guilt” as the following: “Victoria’s more vulnerable side shows through when lingering feelings of guilt over her involvement in David Clarke’s demise and an unforgivable rift with her daughter become too much to bear; Lydia returns with a vendetta against Emily and the Graysons that will soon come back to haunt her; Now wise to his father’s transgressions and a duplicitous betrayal by his friend, Tyler, Daniel decides to make a major life change; and Charlotte and Declan find themselves in an unlikely predicament together, on “Revenge,” WEDNESDAY, OCTOBER 19 (10:00-11:00 p.m., ET), on the ABC Television Network.”

Guilt runs deep for a lot of characters on Revenge, so it will be interesting to see how the pieces of the puzzle unravel this week.

Fans are loving the new ABC drama, so much so, the network has decided to pick Revenge up for a full season order of 22 episodes.

Head over to our comments section and sound off! We want to hear from you: is Revenge still on your hot list? How about its star Emily VanCamp? And what has been your favorite method of revenge so far?

Did you love it when Emily outed the Senator? How about when she took down the psychiatrist last week? Or perhaps, the best is still yet to come…

Don’t forget to check out “Guilt” Wednesday night on ABC!