Michelle Obama reveals that Barack Obama hates letting his girls watch Keeping Up with the Kardashians and other details about life in the White House.

Michelle Obama has pretty strict TV rules for her two daughters Malia and Sasha: No non-school related television during the week and only limited hours on weekends. But one guilty pleasure they’re allowed to enjoy on the tube is Keeping Up with the Kardashians — much to their father Barack Obama‘s chagrin. 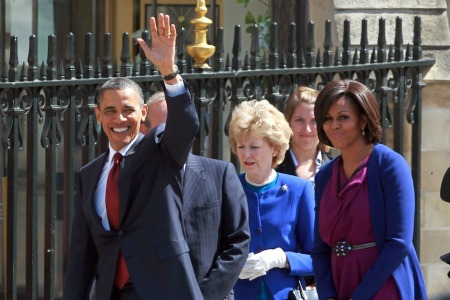 “Barack really thinks some of the Kardashians — when they watch that stuff — he doesn’t like that as much,” the First Lady told iVillage. “But I sort of feel like if we’re talking about it, and I’m more concerned with how they take it in — what did you learn when you watched that. And if they’re learning the right lessons, like, that was crazy, then I’m like, okay.”

To keep the young girls level-headed and give their family unit some normalcy, the Obamas have some other rules. The girls make their own beds every day and do their laundry, and all of them sit down together at the dinner table every night.

“It’s really the interaction that we have as a family that makes it feel like a home,” Michelle said. “It’s sitting down at the dinner table and having Barack’s day be really the last thing anyone really cares about. So he’s sort of the throw-on piece. It’s like, ‘Oh yeah, Daddy, and what did you do today?'”

And of course, the First Lady visits Target and dresses in clothing from J. Crew to keep herself grounded.