Harry Belafonte appears on an early morning TV interview with his eyes closed, but he likes what he sees at the Occupy Wall Street protests. 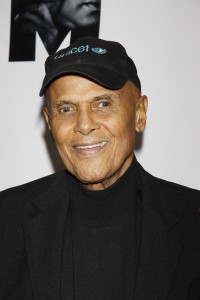 Harry Belafonte has helped to world see many injustices in his lifetime. Yet during a TV interview on Friday, the 84-year old singer and activist was caught his eyes closed shut.

It happened during an early-morning satellite interview with KBAK in Bakersfield, Calif. The hosts cut to a live image of Belafonte to begin the interview, but he was unresponsive with his eyes closed.

Belafonte was “meditating” after weeks of doing publicity for his new memoir, My Song, and the corresponding HBO documentary, Sing Your Song, which debuted Monday night according to a statement from rep Ken Sunshine to SheKnows.com.

“After weeks of literally hundreds of interviews promoting his HBO documentary, memoir and CD, Mr. Belafonte had an early morning satellite TV tour this past Friday,” Sunshine said. “True to form, there was a technical glitch in the feed to a local station in Bakersfield, CA. His earpiece wasn’t working, so he decided to take the time to meditate before the rest of his Day-O.”

“Day-O” is a reference to Belafonte’s famous Day-O (The Banana Boat Song), which was recently sampled by Lil Wayne for his single 6 Foot, 7 Foot.

If Belafonte was meditating Friday morning, he still has his eyes wide open to contemporary activism, including the Occupy Wall Street movement.

“I’m very encouraged by what young people are doing, and I think that the examples that we set with our own lives in the past have been a good measure for young people to begin to evaluate their own lives,” said Belafonte to Reuters in an interview posted Monday afternoon.

Belafonte was a pivotal force in the 1960s Civil Rights movement.

“I don’t think we have the right to do anything but speak out against injustice,” said Belafonte, who criticized presidential candidate Herman Cain last week. “We may think we have a right to be indifferent, to do nothing, but ultimately there’s a terrible price to be paid for that.”