Kim Kardashian says her dad would have loved being a grandfather and meeting his new son-in-law Kris Humphries. 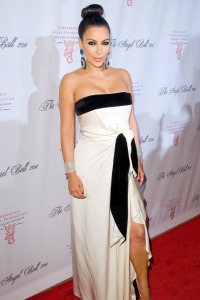 Reality star Kim Kardashian may appear to have it all, but the business mogul suffers from a heartbreak most of us can only imagine, losing her beloved father when she was just 22 years old. Now Kim says she is really sad her father is missing out on two people he would have loved: her sister Kourtney’s son Mason and Kim’s new husband Kris Humphries.

During the Angel Ball to benefit the Gabrielle’s Angel Foundation, Kardashian told People, “When I look at Mason he’s so much like my dad. He gives these facial expressions sometimes that look just like my dad.”

“My dad would have loved him,” she said.

“That’s really hard… that he’ll never get to meet my husband or my children,” she said. Kardashian wants kids in a year, she recently said.

The Angel Ball, sponsored by Kim Kardashian’s engagement ring designer Lorraine Schwartz, was held to raise money for cancer research. The reality star spoke about her father’s own struggle with the disease that took his life just eight weeks after his diagnosis.

“I wish we knew a little more about the disease,” she said. “My dad didn’t really want to tell anyone he was sick. He wouldn’t even tell his parents he was sick. He didn’t tell them until like a week before he passed away. He was the kind of guy [who] never wanted to go to the doctor to see what was wrong, because he hated doctors — sorry, doctors out there.”