Is Will Smith a baller now? No, but he is one of the new owners of his hometown NBA team. 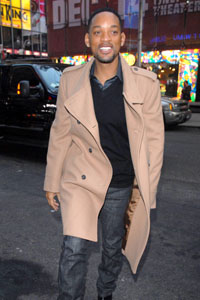 As a teen, Will Smith’s mom made him move away from his home in West Philadelphia and in with Auntie and Uncle in Bel Air.

Oh, wait — that was Smith’s character in Fresh Prince of Bel Air. Our bad, but Smith really is from Philadelphia — and now he’s investing in his hometown by purchasing a share of the 76ers NBA team.

Smith became one of six owners of the team after officials approved the sale of the struggling NBA franchise, according to a Philadelphia news station. The actor and rapper went to Overbrook High School in West Philadelphia and still has strong ties in the area.

“It is an honor to become part of this storied franchise. We have a lot of work to do, but we have a rich history, a strong foundation and a bright future,” another new owner, multibillionaire Joshua Harris, said during a press conference Tuesday morning.

At least one player is pumped about his new boss.

“I think it’s dope that the Fresh Prince is one of our new owners. Maybe Willow can perform at halftime,” guard Evan Turner tweeted after the announcement, referring to Smith’s hair-whipping, musically-inclined daughter.

Smith isn’t the only celebrity NBA owner: Jay-Z purchased a stake in the New Jersey Nets back in 2004. That team is set to become the Brooklyn Nets in 2012.

Don’t expect to see Smith courtside anytime soon though — the NBA lockout has canceled games up until the end of 2011. The entire season might end up being canceled if players and owners cannot come to an agreement soon.

Read on for more Will Smith

Are Will and Jada in trouble despite the denials?
Will Smith divorce rumors “not true” says son
Will Smith’s huge movie trailer matches his ego, says NYC