Hollywood threw a smashing good party for Bill Clinton’s 65th birthday while raising money for The Clinton Foundation. As often happens when all that talent is in one place, a few celebrity guests got together to churn out a new Funny or Die spoof– and Clinton got in on the video fun! 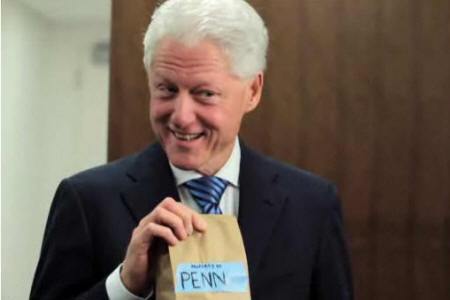 Wiig may take the cake for worst ideas after suggesting a moratorium on breathing and then a bake sale, while Damon obsesses over the foundation needing a baseball team: The Clinton Clobberers. Danson chimes in with a great initiative that already exists, and Jack Black also makes an appearance via video conference to share his new theme song for the foundation.

Activist Sean Penn, however, is too distracted by the thievery happening in the break room to focus on the needs of others. His initiative is that people stop stealing his lunch.

It isn’t until Kevin Spacey and Clinton show up that it all comes together. After Stiller pitches their bizarre ideas over the phone we find out who’s really on the other end of the line, not to mention who has been stealing that lunch. While most of us wouldn’t be at all interested in Penn’s vegetarian brown bag feast, a certain former president who recently jumped on the vegan bandwagon seems to have sticky fingers!

Charlie Sheen cooks up “winning recipes” with Funny or Die!