The mysterious Jake shows up on The Secret Circle this week and not everyone is happy to see him.

If you’re anything like us, you’re still dumfounded over the possession and drowning of Nick on The Secret Circle last week. That was just the beginning — things are only going to get crazier in Chance Harbor on this week’s episode, “Wake.” 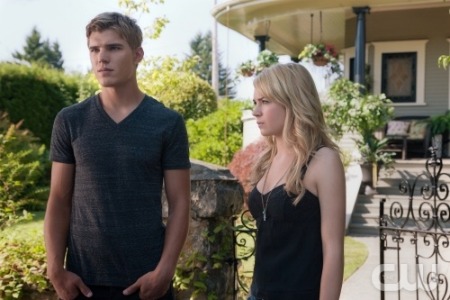 Last week, a suitcase filled with demonic creatures made it’s way to Chance Harbor on The Secret Circle and this week, more mysteries arise.

This week on “Wake,” a young man named Jake, who left Faye (Phoebe Tonkin) behind in the past, reappears and she’s got one thing on her mind — settling the score.

Netflix teams up with CW >>

Things get even more complicated when Jake takes an interest in Cassie (Britt Robertson), leaving both Faye and Adam (Thomas Dekker) bothered.

Check out a preview of The Secret Circle’s new episode “Wake” and then check out the full episode Thursday (Oct. 20)…

The CW officially describes “Wake” as the following: “When Jake, a mysterious young man, shows up in Chance Harbor, he learns a lot has changed since his last visit. For one, the girl he left behind, Faye has discovered she’s a witch and has plans to get even with the handsome guy who broke her heart. To complicate things further, he sets his sights on the alluring Cassie, much to Adam and Faye’s dismay.”

Have you been watching The Secret Circle from the beginning? The show just got picked up for a full season order, which means there’s a lot of fans enjoying Thursday nights on the CW.

Check out “Wake” Thursday only on the CW.