Want to party with Justin Bieber on New Year’s Eve? Find out how you can ring in 2012 with the pop star. 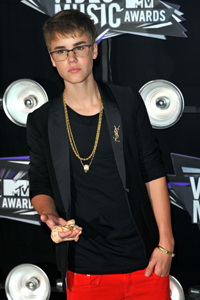 Justin Bieber has a busy holiday season lined up! In addition to his first holiday album, Under the Mistletoe, he is also going to play live on Dick Clark’s New Year’s Rockin Eve with Ryan Seacrest 2012. The long-running New Year’s Eve special is celebrating its 40th anniversary and, in addition to Bieber, Lady Gaga will also be joining the festivities.

The show will air on ABC and will include five and a half hours of live acts, covering New Year’s parties from around the world — ending with the famous Times Square tradition of Dick Clark counting down to midnight to bring in the new year.

If you can’t wait until December 31, 2011 to get your Justin Bieber fix, he will be releasing Under the Mistletoe on Nov. 1st and will drop his first video from the album for the song “Mistletoe” on Oct. 18th.

Why did the Biebs decide to release a holiday album? “I was going to put out my album soon anyways, and I was thinking, ‘It’s near Christmastime. If I’m going to release an album near Christmas, I figure maybe I’d just do a Christmas album.’ The fans get more music, and everyone’s happy,” he said.

His album will feature a mix of Christmas classics (“Santa Claus is Coming to Town,” “Silent Night”) and new songs (“Mistletoe,” “Christmas Love”). He and Mariah Carey will also sing a duet of her hit holiday song, “All I Want for Christmas.”