The team behind Lost and Felicity gives fairy tales a modern makeover on ABC’s Once Upon a Time, premiering tonight. Then on Friday, the team behind Buffy the Vampire Slayer and Angel go criminal with their own take on fairy tales on NBC’s Grimm. SheKnows has the dish on what makes them different, along with some sneak peeks.

ABC‘s Once Upon a Time and NBC‘s Grimm bring the battle between good and evil to the modern world, but in very different arenas. While Grimm is a crime procedural-fairy tale hybrid, Once Upon a Time is a thrilling, twisting character drama that kicks off when the infamous Evil Queen (Lana Parrilla) curses Snow White (Ginnifer Goodwin), Prince Charming (Josh Dallas), their daughter (Jennifer Morrison) and the rest of the fairy tale world into a not so happily ever after. 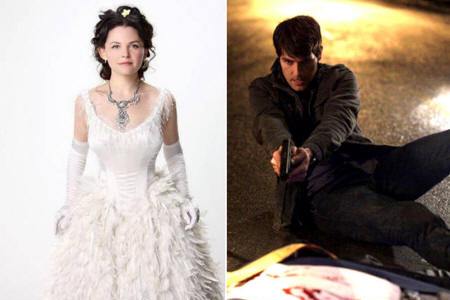 In the premiere of Grimm, Detective Nick Burkhardt (David Giuntoli) is shocked to learn he’s descended from a family of criminal profilers who can see fairy tale villains hidden behind human masks. Our favorite Grimm tales were actually warnings about the very world in which we live and the bad guys are still here today.

Once Upon a Time, in contrast, finds two separate worlds colliding, with the fairy tale characters of our youthful cast out of The Enchanted Forest and into the most horrible reality imaginable: Our world!

Once Upon a Time‘s Storybrooke Ending

City girl Emma Swan (Morrison) is a tough bail bonds collector who’s been on her own since she was abandoned as a baby, but it turns out, she wasn’t actually abandoned — she was saved. 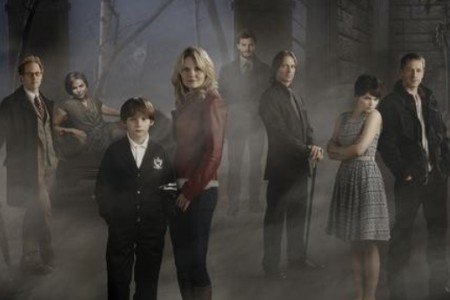 Henry, the son she gave up for adoption (Jared Gilmore), shows up with a book of fairy tales that offers a very different take on her back story. In short, Snow White was able to save her daughter from The Evil Queen’s curse, but everyone else has been frozen in the parallel world of Storybrooke, Maine for 28 years.

Emma escorts Henry back to his strange little town, where Sister Mary Margaret is actually Snow White, the John Doe at the hospital is Prince Charming and his adoptive mother, Mayor Regina, is actually The Evil Queen. Rumplestiltskin/Mr. Gold (Robert Carlyle) and Jiminy Cricket/Archie (Raphael Sbarge) are also in the mix.

The locals have no memory of the Enchanted Forest and Emma’s not buying it, but Henry believes the fate of both worlds lies in her hands.

Once Upon a Time is no Lost

With both worlds in jeopardy, Once Upon a Time will jump back and forth between the two realities, but in spite of its progeny, this fantastical tale is not a retread of Lost. 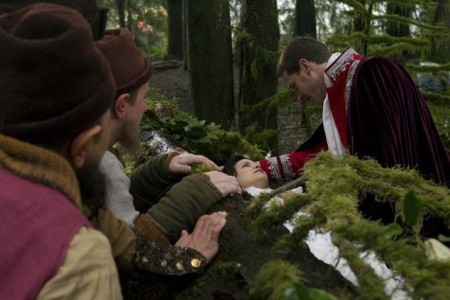 Lost writers Adam Horowitz and Edward Kitsis are at the helm of ABC’s new series, while Lost head honcho Damon Lindelof was involved in the pilot and dubbed Once Upon a Time‘s “godfather.” That means viewers can expect the series to be wildly imaginative, and Lost fans can also expect to see some hidden references.

Once Upon a Time is not, however, another series trapped in confounding mythology and efforts to get off the island — or in this case, to break the curse.

“The show, at its core, is a character show,” Kitsis (Lost, Popular) told SheKnows. “We are much more interested in the character than the mythology. Why does the Evil Queen hate Snow White? Why is Grumpy (Lee Arenberg) grumpy? Why does Geppetto (Tony Amendola) want a boy so badly he made one out of wood?”

“We love the idea of going back and forth and informing what the character is missing in their life and we love the mishmash — the idea of Jiminy Cricket talking to Prince Charming and Geppetto and Grumpy all at a war room council,” he continues. “For us, part of the fun of the show is that you can bring in all of these characters from all of these stories.”

Once Upon a Time & Grimm Sneak Peeks

Snow White, The Evil Queen, Rumpelstiltskin and The Big Bad Wolf are just a few of the fairy tale characters heading to primetime this week. SheKnows already shared the Grimm extended preview. Now, here are a few telling clips to prepare you for Once Upon a Time.

Red Riding Hood gets an update

The Princess and The Frog inside scoop