Arnold Schwarzenegger is done with government and back to take over our movie theaters with a new action film. 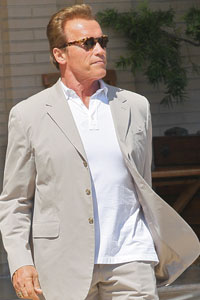 Remember when Arnold Schwarzenegger said “I’ll be back” in Terminator? Of course you do — we all do. We kind of forgot that former Governator is actually an actor, given that he’s spent much of the past decade focusing on politics.

Now he’s back to the industry that made him famous. Schwarzenegger is in New Mexico working on a new film directed by Kim Jee-Woon: The Last Stand.

“Fantastic first day on the set of The Last Stand. Big thanks to the crew — keep up the great work,” he tweeted Monday night.

The separated actor plays Sheriff Ray Owns in the film about a LAPD cop transferred to the sleepy border town of Sommerton Junction. Schwarzenegger’s character is forced to deal with a violent drug dealer as he makes his way to the border.

“After a spectacular escape from an FBI prisoner convoy, the most notorious, wanted drug kingpin in the hemisphere is hurtling toward the border at 200 mph in a specially outfitted car with a hostage and a fierce army of gang members,” studio Lionsgate wrote about the film’s plotline.

“He is headed, it turns out, straight for Summerton Junction, where the whole of U.S. law enforcement will have their last opportunity to make a stand and intercept him before he slips across the border forever. At first reluctant to become involved, and then counted out because of the perceived ineptitude of his small town force, Owens ultimately accepts responsibility for the face off.”

Sounds like the type of film he does best. Schwarzenegger’s co-stars in the film are not widely-known actors, but maybe this vehicle will help catapult them into stardom.

Will you watch Arnold Schwarzenegger return to the big screen?

Read on for more Arnold Schwarzenegger