Move over Russell Crowe — Hugh Jackman has a new co-star. Anne Hathaway has officially signed on for Universal Pictures’ adaptation of the classic musical Les Miserables.

Anne Hathaway has gone from starring in the upcoming Batman blockbuster The Dark Knight Rises to the French musical Les Miserables. The Oscar-nominated actress has signed on to star in the big screen adaptation opposite the multi-talented Hugh Jackman. 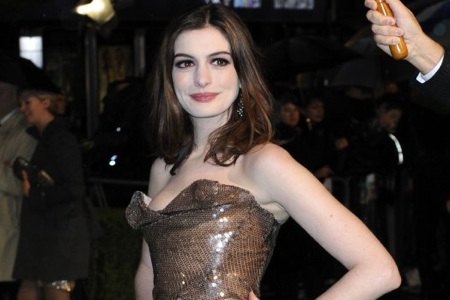 According to The Hollywood Reporter, Hathaway has snagged the “coveted role of Fantine,” alongside Jackman’s Jean Valjean and Russell Crowe’s Inspector Javert.

Les Miserables is a famous French novel by author Victor Hugo that has been adapted for the stage and screen dozens of times — most famously as a musical in 1985. The story centers on Valjean, a poverty-stricken ex-con, who yearns for redemption and a better life for his family. Hathaway’s Fantine is a former beauty, who embraces prostitution in order to care for her young, illegitimate daughter Cosette.

In the midst of the trials and tribulations of these characters, Inspector Javert serves as a common thread. The overzealous lawman has a hand in both Jean Valjean and Fantine’s troubles.

Thus far, all the leading actors have some type of musical background. Hathaway has belted out a song or two in several films, Crowe has his own rock band and Jackman is trained in theater. The Australian actor even won a Tony Award in 2004 for his lead performance in The Boy from Oz.

This production of Les Miserables is dripping with Oscar-caliber talent. Director Tom Hooper won an Academy Award earlier this year for his work on The King’s Speech. Hugh Jackman hosted the Oscars in 2009, followed by Anne Hathaway, who co-hosted in 2011. Hathaway was also nominated in 2008. Russell Crowe won the statue for Best Actor in 2001 for his performance in Gladiator. Next awards season, Les Miserables will be one to watch.