Jennifer Aniston and Barbra Streisand were honored in Los Angeles Monday night at the 18th Annual Women in Hollywood tribute. 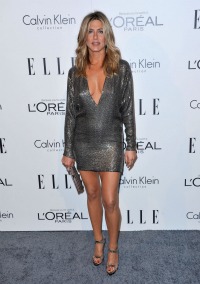 Hollywood came out to honor some of the top females in the industry in the star-studded gala for ELLE Magazine‘s Women in Hollywood tribute, which included two very funny girls: Barbra Streisand and Jennifer Aniston.

Overall, nine actresses were honored at the annual event — including Michelle Pfeiffer, Evan Rachel Wood, Naomi Watts and Viola Davis — but it was Streisand who received the most praise of the night.

Slumdog Millionaire actress Freida Pinto said onstage that it was an incredible birthday gift “to share the same oxygen” as Streisand.

“You’re a legend not only in Hollywood but literally all over the world,” the actress added. “I can say that because I come from India.”

Streisand had similar words of praise for her fellow nominees, stating, “They’re all so charming, so well-spoken, and so thin,” she joked. “And I ate the chocolate cake.”

Fellow actress Reese Witherspoon gave probably the biggest compliment of the night to Jen, revealing a hint of a girl-on-girl crush.

“There are not that many people actually who have this incredibly combination of sex appeal and complete lovability,” Witherspoon said onstage before presenting Aniston’s award. “You just want to get your nails done with her and you want to make out with her — at least I do.”

The Friends actress also sported a hit of a baby bump, with some speculating that the big-screen star might already be expecting. Aniston has been dating boyfriend and actor Justin Theroux for several months now with online gossip sites hinting that the couple is wanting to start a family soon.

The event, which took place at the Four Seasons Hotel in Beverly Hills, will also be featured in ELLE‘s November issue.