Transformers star Shia LaBeouf got into a bar brawl in Vancouver last week. 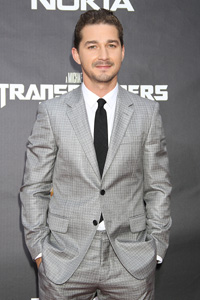 Shia LaBeouf’s night out with the boys turned into what appeared to be a good old-fashioned bar brawl. The Transformers star is in Vancouver to film his new movie, The Company You Keep, and likes to frequent the bar Cinema Public House to unwind with friends.

“It is not clear what provoked the attack, but Shia threw the other man to the ground inside the bar,” said Vancouver radio station Nations 1130. “Security personnel then took both parties outside, where the … man ripped off his shirt and started punching Shia.”

One spectator took a video of the event, which shows what appears to be LaBeouf laying on the ground while a shirtless guy is beating him up. LaBeouf’s friends then rush over to hold him back from chasing after the guy. His friend tells him, “You gotta lay low right now,” and continues talking to him, apparently trying to calm him down.

LaBeouf, 25,  was spotted on Sunday riding his bike around Vancouver without any apparent injuries.

The actor seriously injured his left hand in 2008 when he was involved in a car accident. The other car reportedly ran a red light and was at fault, however LaBeouf was cited for misdemeanor DUI because the sheriff said, “he was showing obvious signs of intoxication from the smell of alcohol coming from his breath.”

It will be interesting to see if LaBeouf returns to his favorite Vancouver watering hole after this bar brawl. The Company You Keep, slated for a 2012 release, is directed by Robert Redford and stars Anna Kendrick and Stanley Tucci.