Viola Davis is a mom! The Help actress has adopted a baby boy, and shares the biblical name she’s chosen for her new bundle of joy.

Viola Davis may be over the moon after adopting a baby boy, but it’s her friends who can’t hold back the happy news! Word of Viola Davis’ adoption comes courtesy of actress Octavia Spencer, who spilled the baby beans at the ELLE Women in Hollywood event Monday. 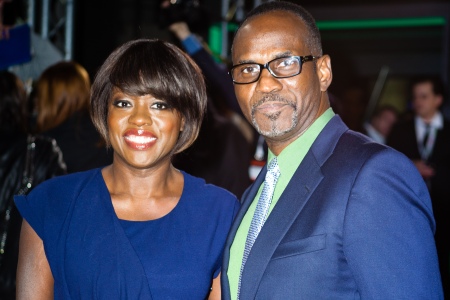 Viola Davis adopted a baby “like, two days ago” according to friend and brilliant The Help co-star Octavia Spencer. The 39-year-old actress (who played Minny opposite Davis’ Aibileen) shared the news on stage Monday where Davis was among nine women being honored.

Few details are known about Viola Davis’ baby boy, though the 46-year-old Davis did reveal that she and husband Julian Tennon have chosen the name Genesis.

In August, Viola Davis announced the couple’s plans to adopt, adding that they were in the process of finding a child domestically. Genesis is the first child for the couple, pictured here Oct. 7 at The Help premiere in Germany, while Tennon has two children from a previous relationship.

At Monday night’s ELLE Women in Hollywood event Viola Davis, an Oscar nominated actress, had this to say about her work:

“What keeps me in the business is hope, and that’s the hope that women of color are also part of the narrative. (I’m) sending a telepathic message to you: Every time some young actress of color comes in a room with a character they’re auditioning for that’s not ethnically specific, that you have a space in your brain that can open up and embrace them and allow them in, because I’m telling you, their lives are just as fascinating and multifaceted.”

Congratulations on the award and the adoption news to Viola Davis!