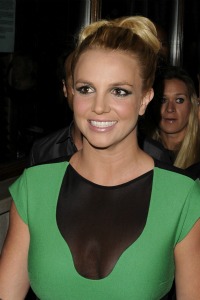 Britney Spears shakes it up again with her latest music video, “Criminal.” From the opening moments — when you see her in an abusive relationship until rescued by a bad boy with a heart of gold (played by real-life boyfriend Jason Trawick) — Britney takes fans on a sexy rollercoaster ride through images that some might say are too racy even for MTV.

Last week, Britney tweeted to her fans, “Just saw the final cut of the “Criminal” video…It’s so hot. Can’t wait for you guys to see it next week.”

Well it dropped today and let’s just say it is quite suggestive. The concept of the video is Britney getting away from her abusive, aristocratic boyfriend and being rescued by her dark, criminal boyfriend (Trawick). They then take off on a life of crime, sex and darkness that makes you take a step back and wonder just what they were thinking!

The video is unsettling, like you are watching Britney in flagrante delicto with her boyfriend — leaving you half-cringing and half glued to the screen.

Shot in London prior to the August riots, it features Britney robbing a convenience store with a gun and in various stages of undress. There is a bit of dancing, but don’t expect Britney to be cavorting with her usual cast of backup dancers amongst elaborate sets.

In a statement released to MTV News, Britney’s management said, “The video is a fantasy story featuring Britney’s boyfriend Jason Trawick, which literally plays out the lyrics of a song written three years before the riots ever happened.”

Is Britney on the verge of marrying Jason? Read more here >>

The video’s director Chris Marrs Piliero stated on his Twitter account, “Not a whole lot i’m allowed to say about the @britneyspears criminal vid other than I love this video and can’t wait for it to come out,” followed by, “Oh and that she looks gorgeous in it…pretty sure it’s cool for me to say that…”