Soulja Boy was caught in small town Temple, Georgia with tons of cash, weed, and guns. 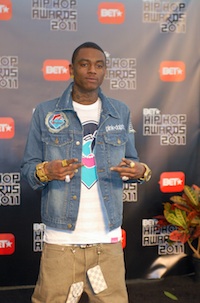 Soulja Boy was in a rented Cadillac Escalade with four other men when they were pulled over for a traffic violation around 3:00 a.m. Sources report police searched the SUV and found major amounts of marijuana, cash (one report lists as much as $70,000) and a ton of guns. All four men were arrested on scene. It’s unclear if any were arrested for failure to properly license the fire arms in the vehicle.

As of an hour ago, Soulja is still in jail and is being held without bond. His court appearance is set for this afternoon. Temple Country Police state that Cortez does not have an attorney listed on his intake paperwork.

Soulja is being charged with felony possession, which means he had 30 grams or less of the drug on him and a prior convicted offense, or he had more than 30 grams and no prior convictions. The 21-year-old doesn’t appear to have any prior drug offenses, but he was arrested back in October of 2009 for a misdemeanor obstruction when he ran from police. Soulja Boy was later released on $500 bail.

Temple Police Chief Tim Shaw said the entire encounter with Soulja Boy and the other passengers was a smooth and cooperative affair. All five men were cordial when police pulled over the rented Cadillac Escalade.

Soulja Boy made headlines last month for his rant about law enforcement and the military troops. He later apologized.