It was a night full of escapades on Gene Simmons Family Jewels, as Gene and the family ran the gamut of emotions from love to hate, to despair, to anger and back again. All leading up to the rock-and-roll wedding of the year tonight on A&E! 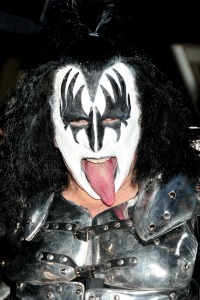 Gene and Shannon were at their therapist Dr. Wexler’s office, when Shannon stated that she didn’t know if she could ever trust Gene again. Then she said she wanted to go to a marriage boot camp, where they would finally get to the bottom of the issues that had been plaguing them for years.

The two worked out their unfinished business throughout the hour, focusing on the infidelity issues that always stood between them and a trusting relationship. They also dove into their past, coming to terms with the sacrifices their parents made and how it affected their later parenting and adult relationships.

One of the most powerful moments in the hour came when Gene was asked to write a eulogy for Shannon if she had died right now. Shannon was taken from the room and Gene had to write his true feelings for her. Afterwards, Gene and the other boot camp members were taken into a small room where Shannon was lying inside a coffin. Gene was dumbstruck, but poured his real feelings out to her and everyone else in the room — a rarity since he is a very private person.

Get a sneak peek of tonight’s wedding episode right here >>

Another powerful moment came when a counselor confronted Gene about his infidelity over the years. She asked him how old his daughter was, and Gene answered that she was 19. The counselor then said, “How many 19-year-olds, 21-year-olds, 24-year olds, 40-year-olds have you slept with? Do you even know their names? They are someone’s daughter. How would you like it if your daughter was taken advantage of by a 62-year-old man?” Visibly upset, the counselor left, leaving Gene food for thought.

After successfully completing the sessions, Shannon finally found it in her heart to forgive Gene so they could start their life new together. Gene made peace with issues he had with both his parents — not just his father — and they looked forward to their wedding, which was just days away.

Missed last week’s episode? Your recap is just a click away! >>

The second and third episodes focused on reflection and love. An entire half-hour was devoted to Gene and Shannon remembering all the happy moments they have had as a couple over the past 26 years. The couple also focused on how they have grown together as a family. Finally in episode 3, the couple found out that love and business do not mix, especially when your partner is such a spotlight hog — as Gene is. Shannon tries to work with Gene on a new business venture, but when things get too heated, Gene fires Shannon, leading to some temporarily hard feelings between the two.