Demi Moore stepped out by herself at Monday’s premiere of her latest movie. Both Demi and Ashton remain tight-lipped about their relationship status, but things don’t look good. 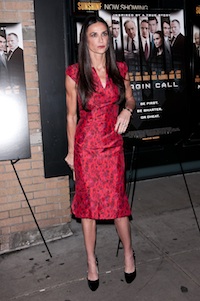 Since late September 2011, rumors continue to pick-up strength that Demi Moore and Ashton Kutcher really are separated. From the initial report that Kutcher cheated on Moore on their wedding anniversary, to the odd tweets from Kutcher about Moore that she ignored — and let’s not forget the moving truck outside their house last week. It seems all signs point to a divorce announcement coming any day now.

Demi added fuel to the divorce speculation fire by attending last night’s premiere of her new movie, Margin Call, alone. Kutcher was glaringly absent from the red carpet and did not mention the event on Twitter. In fact, the only thing Kutcher did mention was Two and a Half Men.

However, many skeptics of the potential-split rumors note that Demi was clearly wearing her wedding ring at the event.

The rumor mill continues to churn as recent reports suggest Ashton Kutcher may be the father of January Jone’s son, Xander. The blind item: “This married actor had a one-night stand with a with one of his exes, who is an actress in an acclaimed television show…” definitely didn’t exclude Kutcher from the list of possible actors.

Demi Moore did not answer any questions about Kutcher’s absence at the premiere, although it was no doubt on everyone’s mind. After the premiere, Demi only tweeted about her dress (pictured top left). “Thank you @Zac_Posen for such a beautiful frock for the ‘Margin Call’ premiere!”

Read on for Demi Moore and Ashton Kutcher