Kelly Clarkson is bringing her music to the acoustic side in a new episode of VH1’s Unplugged. But that’s not all she has on her mind. Read on to see why she wants a role on Parks and Recreation. 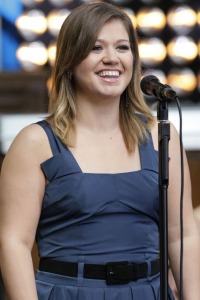 Kelly Clarkson is really trying to branch out, what with an Unplugged episode in the works. Did we also happen to mention she’s trying to land a role on Parks and Recreation? Yeah, she’s a busy woman.

According to a report from Entertainment Weekly, The first season American Idol winner is being featured on an episode of the VH1 series Unplugged.

If you’re not familiar with Unplugged, the VH1 series features artists playing their music in an acoustic setting.

Kelly’s episode will jive with her promo tour for her fifth album Stronger and will include songs like Mr. Know It All and What Doesn’t Kill You (Stronger).

That’s not the only project Kelly Clarkson is working on. Despite admitting she’s a “bad actress,” Clarkson is campaigning to land a guest-starring role on the NBC hit Parks and Recreation.

We’re not sure how serious the singer is, but this is what she had to say in a post she tweeted that linked to her WhoSay account:  “Here’s the deal…I really want to be on ‘Parks and Recreation.’ It’s hilarious! I am a bad actress but maybe I could play a bad actress! I would nail that!”

She continued, “I need to be in a scene with Ron Swanson. I love all of them but the trucker ‘stache gets me every time. So, I’m gonna need all of my fans help please. Please tweet every member of the cast, the producers, the writers, security in that building, and anyone related to that show and tell them they need to have me on as a guest. Pretty, pretty please!”

Whether or not we’ll see Kelly Clarkson on Parks and Recreation remains to be seen, but we will see her on Unplugged Nov. 18.

What do you think of Kelly Clarkson — are you ready to see her on Unplugged? What about Parks and Recreation?