Kelsey Grammer talks about new love and his messy divorce from Camille Grammer.

Kelsey Grammer was a guest on CNN’s Piers Morgan Tonight on Monday night and the results were less than favorable for his ex-wife Camille Grammer. Kelsey went into detail about his first encounter with his now fifth wife, Kayte Walsh, and why he thinks reality television was a great parting gift to Camille. 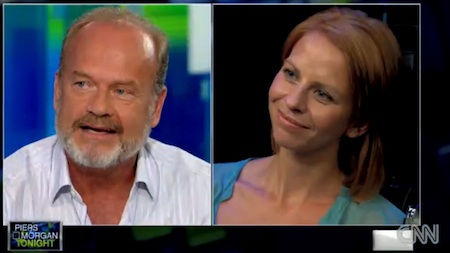 Destiny called him to fall in love again

Kelsey met Kayte Walsh on his flight from Los Angeles to London at LAX. He was headed to London for an acting gig but felt fate was working on something else.

“I knew the minute I got that phone call (about the role) that my life was going to change completely, that something else was happening.”

Grammer says he spotted Walsh before he actually boarded the plane and was taken with her instantly.

“When I walked through LAX, I spotted a girl, who just looked to be magnificent. There was a warmth, a glow about her that I was drawn to. And I thought, ‘Boy, I hope she’s on my flight.’ And then we got onto the plane and she walked down the other aisle…and there was this one moment when we smiled at each other. I thought, ‘I gotta talk to her,’ so we started talking.”

So when did the pair have their first date? On Christmas Day 2009 in London. “It was magnificent. There were lights everywhere” gushed Grammer.

Grammer even talks about their first kiss that night: “I looked at her in that moment and thought, ‘I’m going to try.’ So I leaned in and kissed her and we’ve been together ever since.” Getting teary eyed, he continued, “The snow started to fall. It was insane. It was like the planets had danced together on a segregated charm on our behalf.”

Mistakes made with the affair

Kelsey also admits he did not handle the affair with Walsh and the break-up of his then-current marriage well.

“It was messy. Kayte was unsure. I was trying to do something to make the destruction of the previous marriage go easier somehow and that was a mistake, that was just a mistake. I should have walked home and said [to his then-wife Camille], ‘We’re done. You can finally have everything you’ve wanted. And I found a new life.'”

Grammer also admitted this was the first time he felt he was truly in love. When asked by Morgan if he had found ‘proper love,’ Grammer replied, “Absolutely, there is no doubt about it.”

Kelsey and Kate announced their engagement in December 2010 and wed a few months later in February 2011.

Camille and The Real Housewives of Beverly Hills

Kelsey has stated in previous interviews that his wife’s casting on the Bravo hit reality show, The Real Housewives of Beverly Hills, was a “parting gift.” He went into further details with Piers Morgan, citing Camille’s desire to be famous as a major motivator.

“Whether or not it worked well for her doesn’t matter. It was my way of saying, ‘Look, you always wanted to be famous. Here you go.'”

Grammer thought the reality series was not a reputable form of recognition, but said it provides a quick way to gain the spotlight.

“Everyone knows reality shows are not a great way to get famous. You still get attention; you still get all those things that come along for the ride, which I think she was most interested in. And that was the gift. I knew that when it came up, we’d be saying good-bye.”

Camille had said numerous times over the past few seasons of the Real Housewives that she felt insignificant next to her famous husband.

Currently, Kelsey Grammer says things are “not good” with Camille and that the two have “no dialogue.” He says Camille asked for a divorce early on in their marriage and gives a warning to other couples, “If you ask for a divorce, as some kind of tactic, enough times, you’re going to get one.”