Break out the neon and Aqua Net — it’s time for ’80s night on Dancing with the Stars! 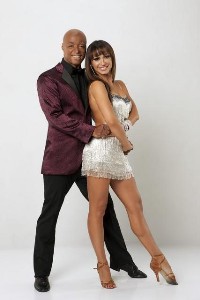 Last week, the Dancing with the Stars ballroom was shocked as Chynna Phillips danced her last dance. This week, we hit the halfway point and it’s anyone’s game as the race for the mirrorball ball trophy continues.

The contestants of Dancing with the Stars went back to the ’80s this week, with dances inspired by big hair and neon bangle bracelets.

Julianne Hough shook her caboose to footloose on DWTS>>

Hope and Maks (24/30): Hope Solo and Maks Chmerkovskiy were “Livin’ on a Prayer” with a tango that Len Goodman said showed “no strength” on Hope’s part.

That’s the bad of it. The rose colored glasses Bruno Tonioli was wearing made her look like a ’80s vixen who was in control. We’ll meet the boys in the middle and say she attacked it, but almost made it look a bit too hard.

Carson and Anna (19/30): Carson Kressley and Anna Trebunkaya broke out their Wham-dancing for a crazy-fun jive that made us laugh and clap all at the same. Here’s why we clapped: He danced with wrist pom poms and did high kicks!

Bruno said it was “loopier than a Looney Tune,” but not in a bad way. He said it was a “crowing achievement in madness.” The only problem we see here, is that there’s not much technique — and it is week five.

Nancy and Tristan (22/30): Nancy Grace and Tristan MacManus took the rumba back to the ’80s but left the connection and passion somewhere else.

We’re not sure where Len got the “it was effective” comment from or what Bruno was watching to get him to say it was “exactly right,” because we missed all that.

J.R. and Karina (28/30): J.R. Martinez and Karina Smirnoff took on the samba. Many men have failed at this rhythm-crushing dance, but not J.R. Martinez. He wiped the floor clean with his Latin flare, which we learned was in is blood.

Len said if any man comes out and asks how to do a samba, he’ll say, “have a look at J.R.” and Bruno said he was a “sex machine.” Carrie Ann Inaba dropped some bleeps over his hotness — so, it’s safe to say J.R. Martinez is back!

Rob and Cheryl (25/30): This week, Rob Kardashian elevated himself to a leading man with his rumba. Cheryl Burke really brought out the sexy side of Rob. He was confident and in control — everything we knew he could be.

Bruno said, “We started to see Rob the heartthrob.” That says it all.

Chaz and Lacey (21/30): Chaz Bono and Lacey Schwimmer paired Kool and the Gang with the samba for a party on the DWTS floor!

He proved big guys can shake their caboose! The best part was that he actually danced this week. There was no babying the knees or moving slow. He really “gave it a go” as Len said.

David and Kym (25/30): David Arquette found balance this week and showed the tango who’s boss! Kym Johnson gave him the perfect choreography to attack and everyone on the panel agreed he was in charge this week.

Carrie Ann and Len fought over his musicality, but who cares, he came to win!

Ricki and Derek (24/30): Ricki Lake and Derek Hough have dominated the last three weeks, and while their fox trot was ’80s cool, it didn’t gel at all.

As Bruno said, “You can’t be a genius every week.” Their running man wasn’t on and the footwork was all over the place.

What did you think of this week’s Dancing with the Stars?