Taylor Armstrong says that being on The Real Housewives of Beverly Hills saved her life. 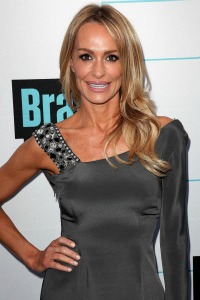 Can being on a TV show save your life? Taylor Armstrong says yes. The reality star says being on The Real Housewives of Beverly Hills saved her life — literally.

Armstrong says that if she did not have cameras around her constantly, then Russell Armstrong‘s violence would only have escalated — eventually, she believes, killing her.

“If cameras were not in my life, there’s a good chance I wouldn’t be sitting here today,” Taylor told KTLA-TV in Los Angeles.

“I believe that, subconsciously, I may have signed up for the show to try and allow my problems to be in the public eye to some extent because, again, it was my saving grace,” she said.

“I’m thankful to be here especially for my daughter,” she said of her five-year-old girl Kennedy.

“Imagine if she had two less parents instead of one.”

“A lot of domestic violence situations end in murder-suicide, versus just suicide. I have my daughter with me today, and by the grace of God and, perhaps, reality TV, I’m sitting here and so is she,” she said.

Taylor Armstrong detailed the abuse in a series of interviews with Entertainment Tonight in September.

Taylor’s accused abuser and husband of six years Russell Armstrong killed himself in August in the midst of mounting financial pressures and the knowledge that Taylor was about to go public with the alleged abuse.

Read on for more Taylor Armstrong

Taylor Armstrong is too demanding for Barbara Walters