Dr. Conrad Murray could only get house arrest instead of jail if convicted of involuntary manslaughter of Michael Jackson. 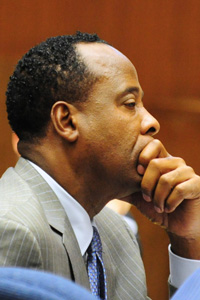 Dr. Conrad Murray is facing a charge of felony involuntary manslaughter for the death of Michael Jackson – and, if convicted, could face a maximum of four years in state prison…or so we thought.

TMZ is reporting that Dr. Murray could spend way less than four years in jail — and may not even be sent to jail. How could this be? Blame overcrowding!

A new California law went into effect on Oct. 1 which says that those convicted of non-violent felonies are sent to county jail, not State prison. Involuntary manslaughter is considered a non-violent felony, which means he would head over to L.A. County jail.

The jail is facing severe overcrowding which means that inmates could be eligible for house arrest, depending on their risk to the community and prior criminal history, meaning Murray has a good chance of getting house arrest.

He may do some time behind bars, but could spend the majority of the time with an electronic monitoring bracelet at home.

“The decision on whether or not Murray gets house arrest is up to the sheriff; it’s not up to the courts or the judge,” L.A. criminal defense attorney Troy Slaten says.”So let’s say, for example, he is sentenced to three years’ probation and one year in county jail. The sheriff could say, ‘We don’t have any room for someone that is not a violent offender and so therefore we are going to have him serve six months on house arrest with electronic monitoring.'”

In addition to jail and/or house arrest, Murray may also lose his medical license and not be able to practice medicine.