Karina Smirnoff has postponed her wedding to baseball star Brad Penny. Find out what that means for the couple’s future plans. 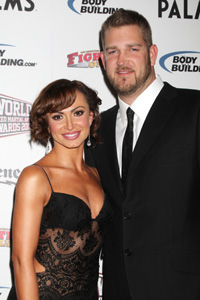 Dancing with the Stars pro Karina Smirnoff won’t be dancing up the aisle anytime soon! Smirnoff, 33, and her boyfriend, Detroit Tigers star Brad Penny, have pushed back their wedding.

“The wedding has been postponed,” a source reports. “They are still together, but have conflicting schedules.”

Smirnoff and Penny have been engaged for almost a year, after going public shortly after she and Maksim Chmerkovskiy split up. In fact, Smirnoff was also engaged to DWTS pro Maskim and postponed the wedding due to busy schedules before eventually splitting up. Hmm…. perhaps it is the one-year-itch?

Penny, who met Smirnoff through mutual friend UFC fighter Chuck Liddell, got down on bended knee and proposed to Smirnoff in Las Vegas — and shortly after Smirnoff spoke excitedly about planning the wedding. “I want a destination wedding where everyone can go to Cabo. We’re thinking January the seventh,” Smirnoff said last November.

No word when the wedding will now be, however a source reports that Smirnoff and Penny “want to spend more time with one another, especially while planning their wedding.”

“I believe a wedding is a celebration of a future together,” Smirnoff told Us Magazine. “It doesn’t matter how it’s going to be. Whatever we decide it’ll be great.”

Smirnoff is still wearing her engagement ring, as she was recently spotted at Joico’s Beauty for a Cure event wearing her $95,000, 4.5 caret princess cut diamond dazzler.

Smirnoff is currently competing (and doing very well!) with JR Martinez in this season’s Dancing with the Stars competition.