Giuliana Rancic is gearing up for the fight of her life against breast cancer. In her corner sits one very loving and optimistic husband named Bill Rancic. 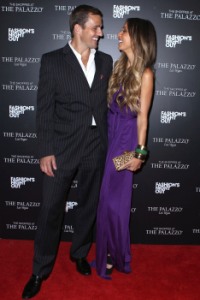 Giuliana Rancic was “a nervous wreck” while announcing she has breast cancer on the Today Show Monday morning. The television host may have barely made it through her chat with Ann Curry, but her husband Bill Rancic is thrilled with her bravery.

Speaking to E! News, Bill said of Giuliana’s interview, “I think she was a lot stronger than I thought because up until this morning, anytime she ever said the word ‘cancer’ she would start crying.”

He adds, “Her goal was to send a message to the young girls out there and I don’t think it could have gone any better. I thought it was a beautiful segment, it was real.”

Bill Rancic also tweeted about Giuliana Rancic‘s pending battle against breast cancer, which she revealed will entail both surgery and six weeks of radiation. “Thank you for all ur love & support today,” the Apprentice winner wrote Monday. “G is reading all your messages. She will win this fight, I PROMISE, & be back better than ever!”

Since her breast cancer announcement the 37-year-old’s Twitter page, followed by 2.3 million people, has remained quiet.

This morning Giuliana Rancic did share a few loving words about her husband, Bill. During the Today Show interview she commented his support has been “unbelievable” adding, “He lets me cry when I want to cry. He just lets me feel what I want to feel.”

Best wishes to Giuliana as she undergoes treatment for breast cancer, and how about a round of applause for Bill Rancic’s support!